The MX-5 you need not make excuses for, thanks to BBR, a turbo and 250hp 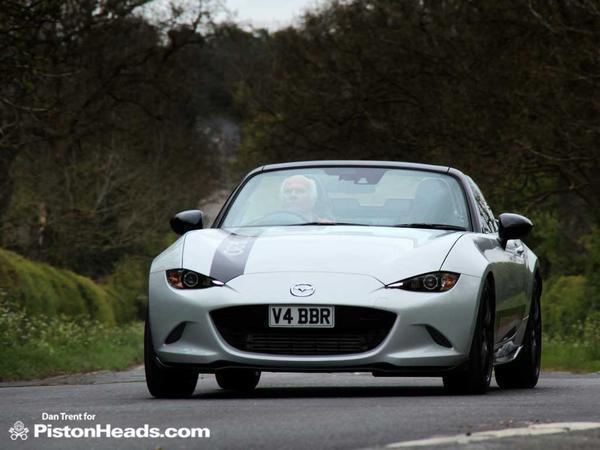 MX-5 beards like your Mazda-loving correspondent will readily tell you the only real way to appreciate that old Jinba Ittai spirit is with a naturally-aspirated engine. And if you agree MX-5 tuning specialists BBR will happily sell you a kit to take your 2.0-litre ND MX-5 to 200hp courtesy of a revised ECU, new cams and a zingy exhaust. 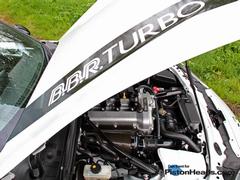 This results in a quick MX-5. If you want a fast MX-5 though you need a turbo. Thankfully BBR knows a thing or two about that too, having offered kits for all four generations of the car from the very earliest days.

This new stage 1 kit for the ND generation car isn’t especially cheap. You can buy it as a DIY installation for £4,395 or take your car to have it fitted for £4,995, both prices plus VAT. Or you can buy a complete car for £29,995 off the shelf, complete with a three-year warranty. Quite a bit for an MX-5. Until you consider that’s about what Abarth will charge you for its version of the 124 Spider, which is of course based on the same platform as the MX-5. And has just 170hp against this BBR car’s 250hp.

Weight and see
We’ll try and avoid too much number crunching but that equates to over 230hp per tonne, with driver. A 300hp 718 Boxster has 213hp per tonne by the same measure but costs £45K. Meanwhile the fruitier 220 version of the new Lotus Elise Sport we drove recently has 243hp per tonne but costs nearly £40K. 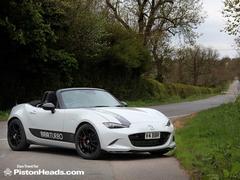 These are interesting bookmarks for this MX-5, given it has a sense of the Lotus’s back to basics minimalism but also more of the Porsche’s daily usability. With the added bonus of not sounding like a slightly knackered VW Beetle.

But it’s a tuner car, right? How can it possibly compare with ‘factory’ products like these?

Really rather well. You’ll have seen us test various of BBR’s tuned before and the highest compliment that can be paid is that they don’t feel like tuned cars. Well, other than they are faster and handle better than the standard versions, obviously.

Haters gonna … love?
Indeed, this could be the turbocharged car for people who hate turbocharged cars. For starters there’s no real sense of lag. BBR has used a generously sized turbocharger running a relatively low boost; it’s even able to maintain the Skyactiv engine’s 13:1 static compression ratio – extraordinary for a forced induction engine. 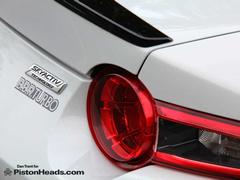 So the character of the car is very much like the standard one. Which is to say the throttle has a beautifully crisp response and the engine revs freely beyond 7,000rpm. Very happily. Basically there seems absolutely no compromise over the rather lovely naturally-aspirated standard car.

But by heck does it go. While you don’t feel the boost coming on like you might in that 718 Boxster the way the mid-range swells from just 2,000rpm or so is most definitely forced induction. Just without any of the lethargy or one-dimensional delivery seen elsewhere. The peak torque of 236lb ft tails off sooner than the naturally-aspirated car but there’s over 200lb ft from 2,750-6,500rpm, against the standard 148lb ft.

This gives you choices. Overtaking grunt is there whether you leave it in gear or flick around the typically delightful Mazda gearbox and give it some beans. Making progress can therefore be as relaxed or frantic as your mood demands. 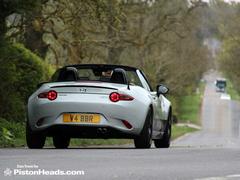 And it sounds great too. There’s just a hint of forced induction sound effects from under the bonnet but you have to be listening out for them to be aware and the crisp and well-judged exhaust note is loud enough to be exciting without sounding the least bit anti-social.

The former keeps the standard Sport model’s Bilstein dampers but runs lower on BBR’s custom-wound progressive springs and is an absolute revelation. Visually it transforms the car’s stance, the wheels properly filling the arches at last. But there’s also more small bump compliance, the MX-5 floating over ripples and bumps but feeling much more composed and settled when the speeds increase or things get properly lumpy – the point at which the standard car starts lurching around and feeling rather unruly. Given how much faster the car is you’d be daft not to basically. 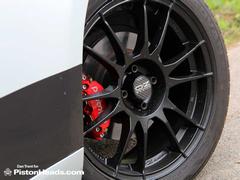 Brake the mould
With this greater confidence and improved body control you’re much happier playing with the balance on the throttle too, the crisp response to the pedal and the base car’s standard Torsen limited-slip diff making it deliciously simple to slide the car around. There’s nothing innocent about the angles you can get the car to without trying very hard at all. Yet in the context of an MX-5 it feels a strangely unthreatening and simple pleasure. There’s still a degree of wobble through the structure like there is in all MX-5s and BBR is wise not to have gone super-stiff with the set-up. What you get is everything that’s nice about the standard MX-5, just in greater quantities.

Tthe Wilwood brake upgrade is probably sensible though, costing £595 for the four-pot versions or £895 for six-pots. Again, the set-up all feels commendably ‘factory’ though, the controls maintaining that lightness and feel you get from the base car. Alright, by this point your MX-5 is probably looking like a £35K car when all’s said and done, unless you pick up a cheap pre-reg or used car and Man Maths the work into a total price not far off a well-optioned new one. 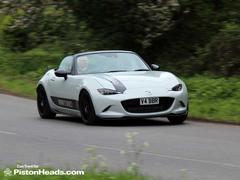 However you wish to play it this turbocharged MX-5 is a very impressive demonstration of BBR’s mature approach to tuning MX-5s and a further welcome option to its impressive portfolio of upgrades. Arguments against the MX-5 just got a whole lot tougher.